This is actually an important detail because it means that I can jump in my car, run through the drive-through, and be back at my kitchen table in 20 minutes flat, eating my general chicken…  if I don’t catch bad traffic.

Naturally, this place has been on my radar ever since I first moved to Springfield. (Yeah, scoping out restaurants in my neighborhood is my first order of business upon moving to a new area. Don’t pretend like it isn’t yours!)

But strangely enough, it took me over a year of living in Springfield to give it a try!

Well, this week, I finally took the plunge and went through the drive-through (their dine-in area was still closed from the Covid-19 lockdown at this point).

Here’s a review of my Pine Garden experience.

Pine Garden is a surprisingly large building, with a large, comfortable parking lot.

It reminds me of a larger fast-food establishment aesthetically.

The drive-through menu is complete with everything you would expect to find at a Chinese Food restaurant in Springfield Mo. Plus, a few extras that you may not expect!

Normally I would have gone with the Cashew Chicken on most nights (this is Springfield, after all).

But tonight, I was feeling a little spicy – So it was the General Chicken that caught my eye. 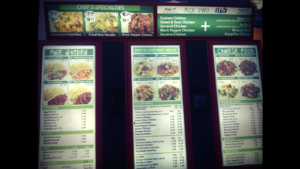 As you can see, their General Chicken special, which comes with a drink, an eggroll, and a crab rangoon, was less than $10!

Talk about being sold… I was all in on that!

My order was processed and handed over to me quickly. No dilly-dallying. I like that. I want my food hot, and I want it fast! So I was pleased with the service in this sense. Top-notch so far!

But what about the taste?

Well, let’s dive into that next. It’s arguably the most important part!

How Did Pine Garden Fair In The Taste Department?

Now, I’m no stranger to Chinese food. I’ve eaten my fair share of general chicken in my day.

And upon pulling the lid off of this meal, I quickly realized that what I was looking at seemed like pretty standard stuff. 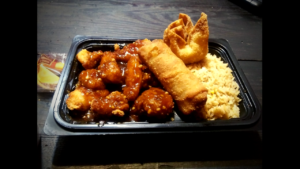 I’m gonna be real with you right now… there is a lot of Chinese food in Springfield that is good, but that isn’t necessarily original, if you know what I’m saying.

And from the looks of it, Pine Garden was shaping up to be this kind of place… you know, the kind of place where you get that General chicken you know and like, not really something out of the ordinary.

This isn’t a bad thing. It’s just a thing! Sometimes you feel like this kind of general chicken, and sometimes you want something a little more ‘original.’ But it’s all good.

Here’s what I discovered as I took my first bite, and really tested the flavor for myself.

Testing Pine Garden’s General Chicken – Does It Hold Up? 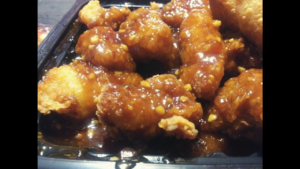 First impression: The first bite was really good. Moist chicken. That general sauce was a little sweet and spicy. It had a little ‘kick’ to it that I liked.

I’m a big fan of the sweet general chicken, but I also enjoy it when it has a little kick to it.

The fried rice was solid. Flavored well. I like to dip my chicken into the rice, get that sauce mixed up with it. That’s champion status!

The crab rangoon was crunchy, with lots of cream cheese on the inside. You can taste the sweetness, that sweet crab rangoon taste. It’s pretty standard. Definitely good.

I felt similarly about the eggroll. Probably pork, or maybe chicken. Some veggies. Very crispy on the outside, very flavorful on the inside. It tastes like most egg rolls you get around here.

The egg roll was probably frozen, probably not homemade. At least, that’s what it tasted like to me.

Portion sizes are awesome for the money. I got the entire meal for less than $10! And that included a drink!

All things considered, I’m about it. It’s not necessarily my favorite spot. There are other Chinese food places I probably prefer, because they give you a flavor that’s a little more original.

But with where it’s situated on the west side of town, it gives me a drive-through option that I can count on for a quick in and out, and the food is definitely delicious.

I mean, I’m talking classic, standard Springfield Mo. Chinese food, the way you like it.

Just be careful with that General chicken if you’re not into the spicy food, because it does pack a bit of a kick! It sneaks up on you after a couple bites.

But I’m not complaining. I’ll definitely be going back… probably more than I should! 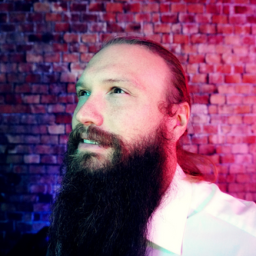